Since biocides are toxic to a certain extent, there has been legislative pressure to reduce the amount of their exposure or leakage. As a molecularly small biocide diffuses through the porous coating, it reaches the surface where it acts against the growing organisms. However, the release of biocide is often rapid and an excessive amount is released very soon after the paint has been applied. A formulation of microencapsulated biocides rather than freely dispersed biocides is one way to minimise the amount released into the environment and to prolong the protection. Microencapsulation allows a minimum inhibitory concentration at the coating surface to be maintained over an extended period of time while inhibiting aqueous extraction. At the same time, human exposure is reduced in both the production and end-use settings.

MikroCaps has developed technology for microencapsulating biocides for coatings that enable a longer release and thus longer anti-fouling activity.

Microencapsulated catalysts and other additives

Microencapsulation enables the combining of substances that would, if not microencapsulated, separate, agglomerate or react with other chemicals in the coating. Microencapsulation allows the substances in the coating to be stable until their application, when microcapsules break or some other trigger releases the core material from microcapsules. MikroCaps has developed technology for microencapsulated additives that are problematic due to their reactivity. MikroCaps technology allows the core material in the capsule to remain stable till the application of the coating on the surface, when additive is released from the capsule and starts to operate.

For a pleasant and long-lasting smell it is recommended to add 0.5–2% of MikroCaps microencapsulated fragrance and simply incorporate it by stirring in water-based interior paint. Due to their high mechanical resistance, microcapsules do not crack during incorporation in the coating. The small size of the microcapsules does not affect the appearance of the surface coating. The white appearance of MikroCaps dispersions is suitable for incorporation in different colour shades. The fragrance starts to release from microcapsules after the coating is applied to the surface. After applying the coating to the interior walls, the place will have a nice and pleasant smell for up to 1 year. MikroCaps offers a wide range of different fragrances with release times to suit the requirements. 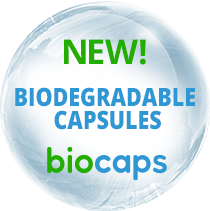